(1991): I did not have to wait long for my next greatest road trips - the one which had all the more bigger reasons why I could never forget it. It was because my cousin got married on the same day, the day India's one of the best Prime Ministers was Assassinated. Rajiv Gandhi, was killed by a suicide bomber on 21st May 1991, the night we were dancing at my cousin's marriage. We had this trip two weeks prior to the fateful day. I learned one big word from English dictionary that day, "Assassination" I never knew what it meant earlier.

One of my Uncles, who was financially well off and he recently returned from one of his abroad trips. He end up buying his first car which happened to be India's most sold car then. It was a very small hatch back called Maruti 800. As its engine was an 800 CC 35 BHP, it was called the same. It was such a small car that only four adults could hardly sit in it and an average kid could adjust too on the back seat. Surprisingly it was a breeze to drive, I realized that during this trip of ours. As my cousin who was a damn good driver, was driving it with such panache that he actually enjoyed driving the little on a highway.

As we stayed around 200 KMS from where my uncle had settled. His wife along with her son drove to our place to invite us for the marriage. My Dad and Mom couldn't go immediately hence I was sent with them as the family representative and they promised to join us a week later. I was 15 years old and "Cars" were my favorite topic of discussion, followed by movies and music as they were my high priorities too. Even today  the story remains same. Now this trip, I was looking forward to - for quite a while, reason being - first they recently returned from Nigeria and my eldest cousin picked up some damn good movies on VHS on their way back and second obviously the car that they recently bought.

Maruti 800 was initially launched in the year 1984 in India. It was conceptualized and designed by the then Prime Minister Mrs Indira Gandhi's youngest son Sanjay Gandhi. It was finally produced by Maruti from India in a joint venture with Suzuki Motors Japan hence called Maruti Suzuki in India. The car was criticized big time before its launch, that it will not be capable of driving 4-5 adults to a long distance and would be very risky to drive. But the launch and following success - I guess, even Suzuki had not dreamed of. In no time, it became one of the most successful cars ever made in India, for more then a decade it ruled the sales charts and when their own second car came, In 1994 it became the second car to beat Maruti 800's record. Although not in production anymore. It became the dream come true for almost every Indian family falling in the category of "Middle Class Income Group".

We started quite early in the morning as we had to travel almost 200 Kilometers. We had hardly any luggage hence it fitted the cars small boot quite well. As I sat on the rear seat, the first thing I realized was that it was quite a small car yet had enough space for 5 regular size people to fit in. I was the only one on back and my Aunt sat ahead with her Son as he was quite a rash driver and was famous in our family for over speeding. As soon as we hit the highway, he hit the top gear of his 5 speed car with four forward and one reverse. In no time we crossed 100 KMPH and my Aunt started giving him warnings, to keep it at that and to not to go beyond it. Another thing I loved about that car was - it hardly made any noise or vibrated. For its size, the stability was quite good. My cousin set me up for a number game and had me count the trucks that we overtook, for the first hour till we took the tea break. As per my last count we had overtaken some 90 odd trucks in an hour and half and hit the half way mark of our journey.

As told by my cousin, the car had average pulling power but very good mileage. He was getting more than 20 KMS per liter of petrol and I guess that was quite economical, convenient and faster than traveling in a train. We took a break and he suggested the next stage of the game. Now as we took a tea and snacks break in a roadside dhaba. I had to keep an eye and count the trucks passing through the dhaba on the highway :). We were there for about 25 odd minutes and as we started again we were over taken by some 50 odd trucks. I wasn't happy with the speed we were traveling in because as fast as we traveled, my journey was coming to an end and I just loved going on and on, on the straight highway with nice summer morning breeze hitting us from all the windows rolled down. And I actually never wanted to end it. Not any sooner at least.

I simply loved the way my cousin was sprinting on the straight open road with no vehicles and will come right behind an on going truck or a bus, slightly swerve towards the right to check out the oncoming traffic and then squeeze in the space,  quickly go up the gears and overtake the truck in a jiffy as the oncoming vehicle caught up the gap. It was at times scary but adrenaline pumping too. Later I realized we had more fun on the highway cause my Aunt dozed off and was hooked to the seat with the seat belts. We crossed all the Small Hills, Jungles, Villages, Farms and finally hit our destination. Although I never wanted to reach and wished the journey would just go on and on. But as all good things had to come to an end, this too came quite quick to my surprise. But it was a damn good ride and the one that I could never forget. Even after 20 years, as I type this, it feels as if we did that trip just yesterday.
Posted by Rohit Sharma at 11:56 AM 3 comments:

My Love For Cars

(1988): Being born in a middle class family has its own advantages and disadvantages. Bad part is that you don't get everything you dream off but the good part is - the feeling that you get, when your most cherished dream comes true. People born with those things can never feel that - I can guarantee you that. But I guess they will have their own set of dreams too, isn't it? Anyways, that brings us back to my dream. As a 12 year old, I always wanted my dad to buy a car but I think with a family of 6 and he being the sole earner - it was a distant dream even for him at that stage of our life. None of our relatives in the radius of 500 KMS owned a car.

Every new car company that launched its product in India would set me thinking whether we can have that in any near future. At that time the options were pretty limited. I almost read everything I could lay my hands on - about any new car launched. Maruti Suzuki had launched its small car couple of years back. It was criticized earlier for its size and power. People believed that it won't be able to drive for long with 4-5 people on board. But it turns out to be a grand success and sells pretty well and acquires a major market share in no time. Than there were Fiats, Ambassadors and Hindustan Motors with their classic Contessa's etc, they were the more expensive ones.
In between I got a great news that my cousin who lived in Delhi, up north was visiting us for summer vacations with his family. He happens to be one hell of a driver and goes every where driving his own car. Now that had me thinking and dreaming of what was in store for me in the upcoming weeks as they arrive. I had no idea what car he had and there was no way I could find out either. No option but to wait for them.

The day of their arrival comes soon and one fine day almost late in the evening - I hear the honking right in front of our house. As I sprint to the main door, what I see is a spanking brand new Premier 118NE that too Maroon in color. It was quite late and cause of hardly any street light - it almost looks like brownish in color. I instantly and automatically fell in love with its wide bonnet and those rectangular lights. Seeing it parked right outside our house - was a sight which remained etched in my memory for quite a long time. Every now and then - I would just walk out of the house and stand with the car, look here and there to make sure some of our neighbors should notice me with the car. My happiness had no boundaries that whole week. 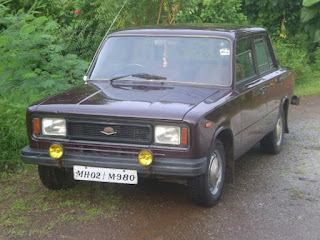 Next day morning as we woke up, all I wanted to do was to jump in the car and go for a drive as soon as possible. I guess my cousin who recently got married and was quite young himself sensed that, obliged us with a quick short drive of the town as he needed to fill the tank too. That one short drive was good enough for me to visualize myself owning the same "one day" and go on a cross country drive all day long as long as I can. It was one of the greatest and happiest day of my life as we went on to drive around the town. I kept on showing him everything around, my school, the only swimming pool of our town, huge court building, a small zoo, couple of theaters, my friends houses which came in between. I Kept hoping that some of my friends would notice me but that did not happen.

I had no idea about the cars specifications and neither I was interested. I was way too happy to see him drive with an ease. The way he turned the steering with one hand and kept the other hand on the window all the time. He will use his right hand only when he needed to shift the gears with his left. It looked like such a breeze and easy thing to drive and to my surprise when I asked him "how long will it take for me to learn driving", he shockingly offered "why don't you finish your graduation and come over to delhi, you can do your post graduation from there, help me with the business and learn / drive cars too". I wish I graduated that day only so I could go along to delhi but my graduation was I guess 8 more years away.

One thing for sure confirmed that day, that I was surely going to Delhi - come what may on my way. This town isn't going to keep me interested for long where my dad bought his home and planned to settle permanently. Not that I wasn't happy or something. I had some best of friends too from whom I was inseparable. But when it comes to fulfilling a long term dream - I guess I was hell bent on doing anything for it.
Posted by Rohit Sharma at 7:26 PM No comments: